Each month, the IBD/TIPP Poll, a collaboration between Investor’s Business Daily and TechnoMetrica, produces an exclusive Presidential Leadership Index. In addition to tracking President Donald Trump’s job approval rating, the index combines results from several questions in the monthly IBD/TIPP Poll to gauge how well the president is viewed when it comes to leading the country, both domestically and internationally.


The index includes questions on presidential job approval, favorability measures on the president’s handling of domestic and foreign policy issues, and whether the president is providing strong or weak leadership.

In addition, IBD/TIPP each month asks questions focused on the public’s outlook overall. These questions gauge satisfaction with the direction of the country, respondents’ quality of life, and the United States’ standing in the world.

IBD/TIPP also produces the Economic Optimism Index at the beginning of each month. 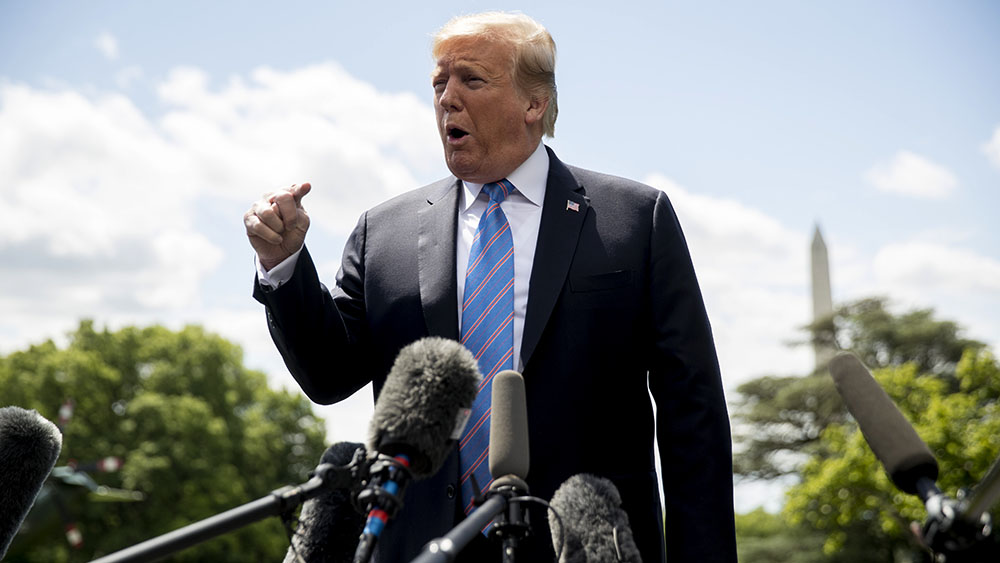 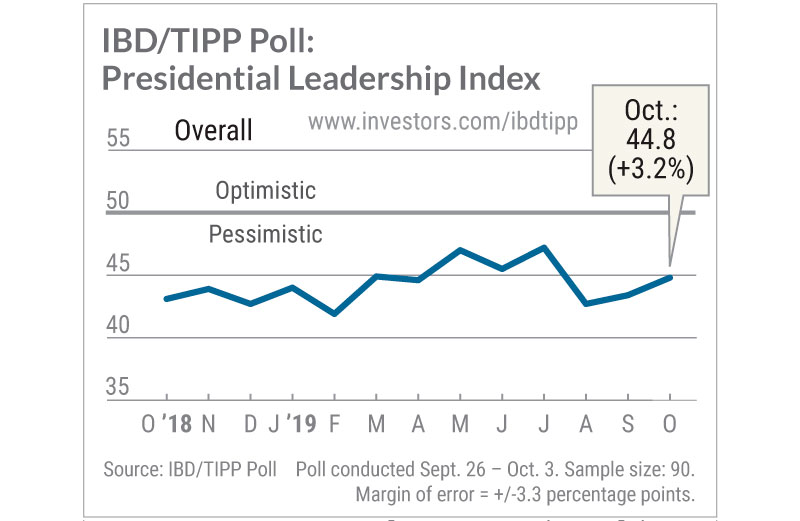 The IBD/TIPP Presidential Leadership Index climbed 3.2% to 44.8 in October after rising 1.6% in September following August’s 9.5% plunge. The highest reading President Trump has scored on this index was in his first full month in office, when it stood at 49.2. The lowest came in August 2017, when it fell to 35.9. The Leadership Index comprises three subindexes measuring the president’s favorability (up 3.5% after September’s 1.2% rise), job approval (rebounding 7% after September’s -0.5% dip and August’s 10.7% dive), and whether he is providing strong leadership (unchanged after September’s 3.9% advance). 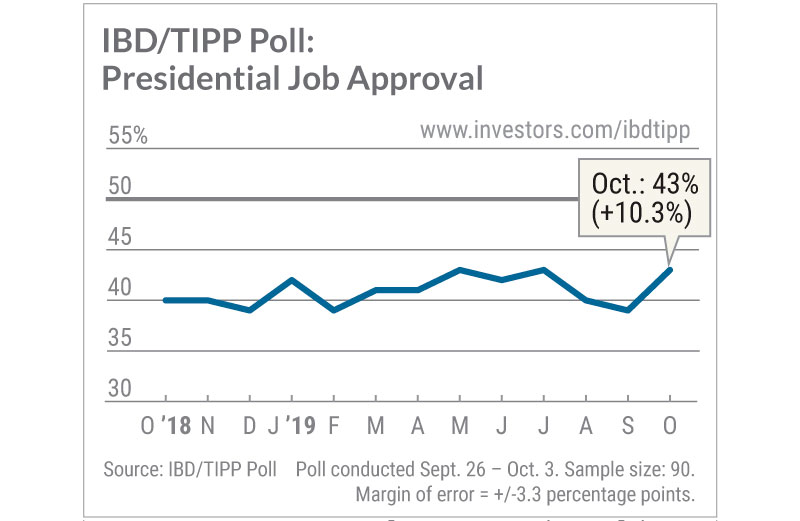 In October’s poll, the share of Americans saying they approve of the job President Trump spiked 10.3% to 43%, after falling to a low of 39% in September. But 54% disapprove of Trump’s job performance, vs. 55% in September.

Direction Of The Country 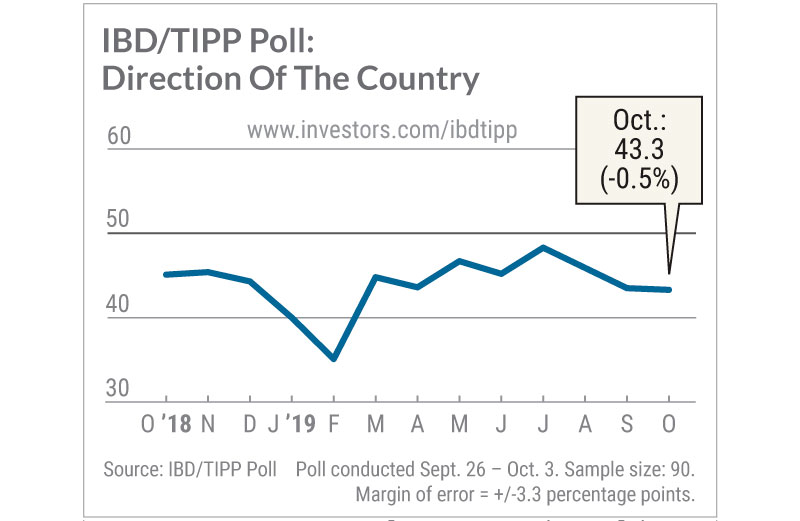 The Direction of the Country Index dipped 0.5% to 43.3 in October after falling 5.2% in September after 5% in August. That gauge jumped 6.9% in July. This index still remains above its 17-year average of 41.8. It’s also above the average of 37 under President Obama. Anything under 50 registers dissatisfaction with the direction of the country. 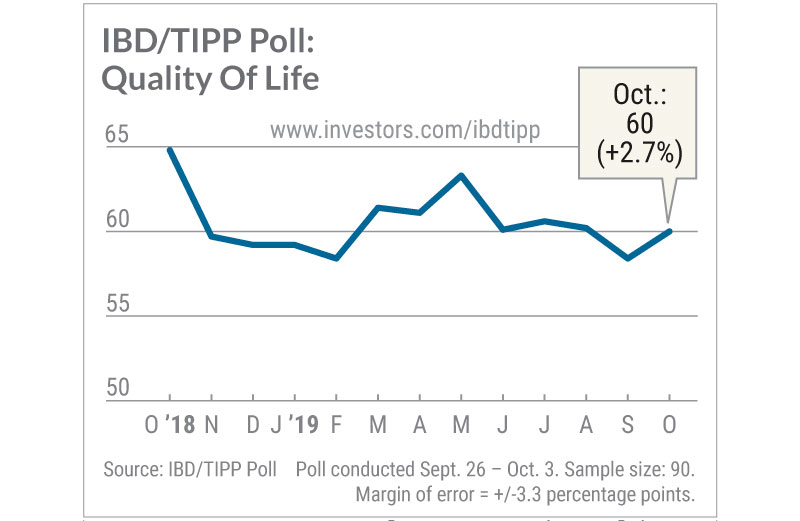 The Quality of Life Index rose 2.7% to 60 in October after dropping 3% in September. It edged down 0.7% in August, inched up 0.8% in July, fell 5.1% in June, but rose 3.6% in May. It remains above the average for this index under President Obama, which was 53.7. Unlike other measures, the Quality of Life Index has been relatively steady over the past 17 years.

Standing In The World 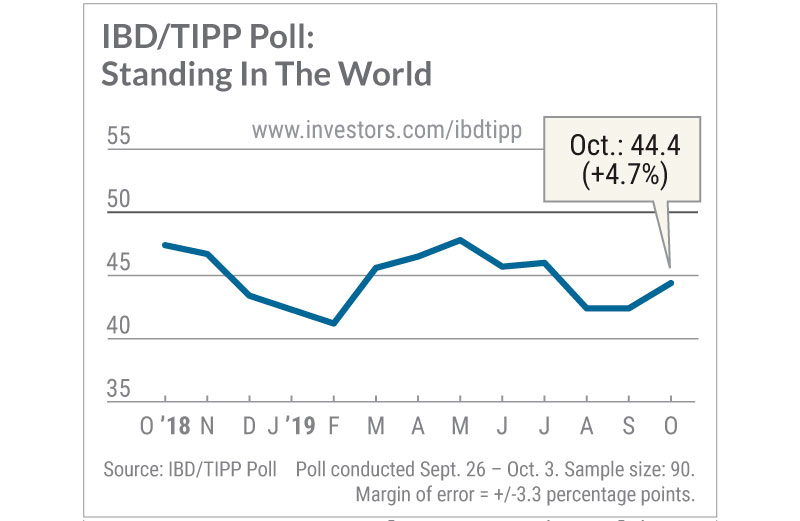 LOS ANGELES, Oct. 3, 2019 /PRNewswire/ — In response to the third and most recent administrative attack this year on the Supplemental Nutrition Assistance Program (SNAP), MAZON: A Jewish Response to Hunger rebuked the U.S. Department of Agriculture’s (USDA) proposal to “modernize” SNAP as a thinly-veiled guise to ram through the Trump Administration’s dangerous and ideological regulatory agenda. […]

IBD/TIPP Poll: No Trump Bump From End Of Mueller Investigation

Despite the end of Special Counsel Robert Mueller’s investigation and the continuing likelihood of a China trade deal, President Donald Trump’s ratings saw little or no bump in early April after sharp gains in March, a new IBD/TIPP Poll shows. X The overall IBD/TIPP Presidential Leadership Index, made up of three subindexes, fell 0.7% to 44.6 […]